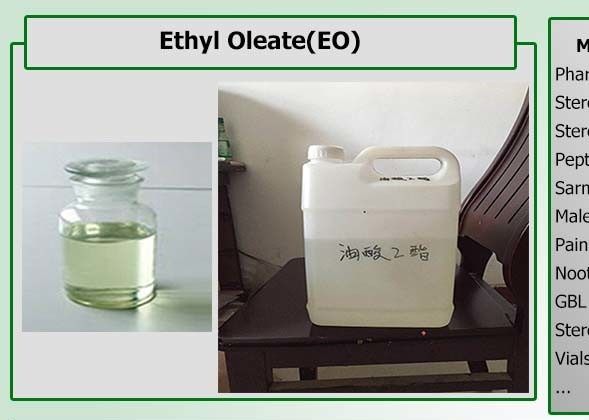 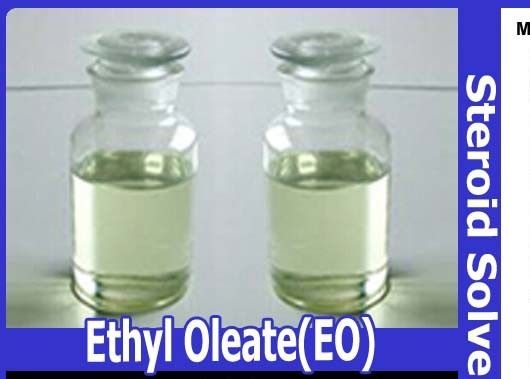 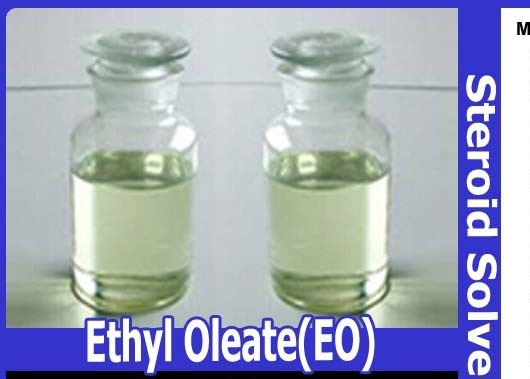 Ethyl Oleate Description:
Ethyl oleate is a fatty acid ester formed by the condensation of oleic acid and ethanol. It is a colorless to light yellow liquid. Ethyl oleate is produced by the body during ethanol intoxication.
Ethyl oleate is used as a solvent for pharmaceutical drug preparations involving lipophilic substances such as steroids.It also finds use as a lubricant and a plasticizer.
Ethyl oleate is regulated as a food additive by the Food and Drug Administration under "Food Additives Permitted for Direct Addition to Food for Human Consumption", 21CFR172.515.
Ethyl oleate has been identified as a primer pheromone in honeybees.
Ethyl oleate is one of the fatty acid ethyl esters (FAEE) that is formed in the body after ingestion of ethanol. There is a growing body of research literature that implicates FAEEs such as ethyl oleate as the toxic mediators of ethanol in the body (pancreas, liver, heart, and brain). Among the speculations is that ethyl oleate may be the toxic mediator of alcohol in fetal alcohol syndrome. The oral ingestion of ethyl oleate has been carefully studied and due to rapid degradation in the digestive tract it appears safe for oral ingestion.Ethyl oleate is not currently approved by the U.S. Food and Drug Administration for any injectable use. However, it is used by compounding pharmacies as a vehicle for intramuscular drug delivery, in some cases to prepare the daily doses of progesterone in support of pregnancy. Studies which document the safe use of ethyl oleate in pregnancy for both the mother and the fetus have never been performed.
Spec.in details:
Product Name:ETHYL OLEATE
Synonyms:(Z)-9-Octadecenoic acid ethyl ester;(Z)-9-Octadecenoicacidethylester;9-Octadecenoicacid(Z)-,ethylester;cis-octadec-9-enoicacidethylester;Ethyl (9Z)-9-octadecenoate;Ethyl cis-9-octadecenoate;Ethyl(Z)-9-octadeceneoate;ethylcis-9-octadecenoate
CAS:111-62-6
MF:C20H38O2
MW:310.51
EINECS:203-889-5
Grade: Pharmaceutical Grade
Storage: Shading, confined preservation
Appearance:clear pale yellow oily liquid
Usage: It was obtained by the hydrolysis of various animal and vegetable fats and oils.
Product Categories:Biochemistry;Fatty Acid Esters (Plasticizer);Functional Materials;Higher Fatty Acids & Higher Alcohols;Plasticizer;Unsaturated Higher Fatty Acid Esters;Fatty Acid Derivatives & Lipids;Glycerols
Melting point:−32 °C(lit.)
Boiling point:216-218 °C15 mm Hg
density:0.87 g/mL at 25 °C(lit.)
FEMA:2450
refractive index:n20/D 1.451(lit.)
Fp:>230 °F
storage temp.: −20°C
Sensitive:Light Sensitive
Merck:6828
BRN:1727318
EO used for short esters:
Ethyl Oleate is a carrier. It is great for short esters like Acetate, Propionate and Phenylpropionate forincreasing concentrations of these esters without crashing.
Many people feel that Ethyl Oleate creates painless injections while others don't feel the same. I only would suggest Ethyl Oleate for short esters for reducing pain and increasing concentration.
You can use a 50/50 concentration of Ethyl Oleate and oil such as Cottonseed or Grapeseed to increase concentration of NPP to 200mg/ml without crashing.
You could even consider a 50-50 mix of EO and GSO. EO makes the gear thinner and some suggest more painless. On the other hand, some guys don't take well to EO and it causes them pain. EO also does harm to the plastic/rubber end of the plunger of a syringe so you can't hold your gear inthe syringe for any duration of storage.
If you notice, there is a trend...generally long esters hold easier at higher concentrations and require less solvent (EO/BB) than short esters.
Application:
Ethyl Oleate BP/EP is a pharma grade material used in many applications such as pharmaceutical preparations, food, cosmetics and health & beauty applications. Ethyl Oleate can function as solvent, glossing agent and emollient. It is an excellent solvent and good moisturiser. Suitable for skin care, hair care and colour cosmetics.