Thymosin Beta 4, also known as TB500, has shown numerous postive impacts such as: recovery of inury and recovery of workouts. TB500 is a naturally occurring peptide. It is part of the thymosin family of peptides. Structurally it is unique in that it has a unique binding ability. This is relative in that it binds to certain substances and transports them to areas of injury. TB500 is found throughout the body, in many tissues, but is heavily concentrated in areas of injury. The first effect of Tb500 is that it reduces inflammation. It does this via 2 mechanisms. It first works to lower inflammatory inducing cytokines. These cytokines induce systemic inflammation. Secondly there is a derivative of TB 500 that actually works to reduce inflammation of white blood cells. The cells responsible for immune system function.

TB-500 is a synthetic fraction of the protein thymosin beta-4, which is present in virtually all human and animal cells. The main purpose of this peptide is to promote healing. It also promotes creation of new blood and muscle cells. The healing effects of TB-500 have been observed in tendons, ligaments, muscle, skin, heart, and the eyes. Thymosin beta-4 is naturally produced in higher concentration where tissue has been damaged. This peptide is also a very potent anti-inflamatory agent.

TB-500 is different from other repair factors, because it promotes endothelial and keratinocyte migration. It also does not bind to the extracellular matrix and has a very low molecular weight. Because of this it can travel long distances through the tissues in the human body.

Storage:Stable at room temperature for 90 days, It should be stored in a freezer for any extended period of time.

1. TB-500 has been known to promote at least partial regrowth of hair which has been lost to male-pattern baldness, to darken at least a portion of hair which has grayed, and is reported to enhance muscle mass in horses. The latter effect may be due to promoting differentiation of satellite cells.

2. Bodybuilders who have used TB-500 for healing purposes have however generally not reported such an effect. However, it might be that the effect occurred, but was attributed to other causes, or that effect did not occur because TB-500 is generally used only when injured, which tends not to be a time of training for best gains.

3. TB-500 is typically provided as lyophilized (freeze-dried) powder in vials of 2.0 mg. A convenient amount of sterile or bacteriostatic water will be added, such as 1.0 mL. In the most common dosing protocol, the entire vial is taken at one time.

4. If taking the entire vial, the entire amount will be drawn into a syringe, typically an insulin syringe, and injected. Injection may be subcutaneous, intramuscular, or intravenous, according to personal preference.

Give one 2ml vial subcutaneous each week for six consecutive weeks. There after use one 2ml vial per month. It's best to give injection 6 days before intense work.

• Decreases inflammation of tissue in joints

• Increase the exchange of substance between cells

• Prevents the formations of adhesions and fibrous bands in muscles, tendons and ligaments.

TB-500,The most common dosing protocol is to take 2.0 or 2.5 mg of TB-500 twice per week for four to six weeks, and then reduce to a lower dosing rate such as once or twice per month for maintenance.

TB-500,The body of knowledge is as yet limited with regard to TB-500 dosage. The above protocol may or may not be the most efficient, but it is the protocol with the most track record. It's entirely possible that as knowledge is gained, method of use will change. A reasonable possibility, for example, is to increase dosing frequency to 3x/week (which I have done personally to good effect), or to increase dosing to 4 or 5 mg twice per week. Before going to such a program, however, I recommend trying the standard protocol first.

We specialize in this field for many years, our steroids and hormones exported to Overseas, to Europe, Africa, Asia and Americas and so on other country, and we have got very good feedback from our customers, and had Established long friendly relations of cooperation.

We have Adequate stock, and can delivery quickly at the very day when receive the payment.
We have special way could ship 0.01 kilo to 3.5 kilo products a time. We offer melting powder into liquid service. And ship the liquid in special bottles. 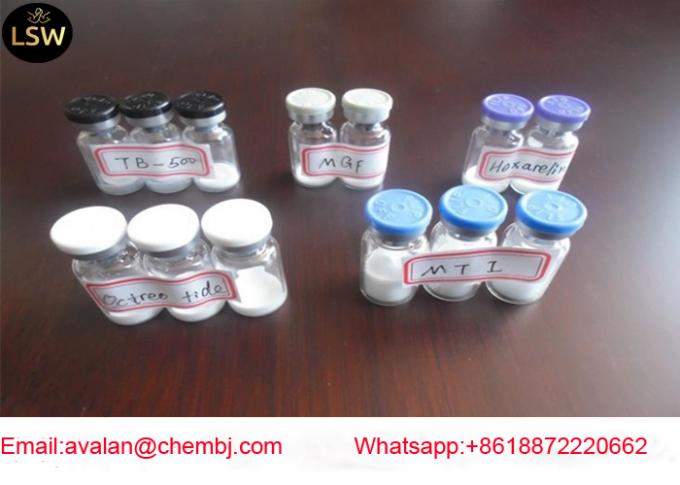