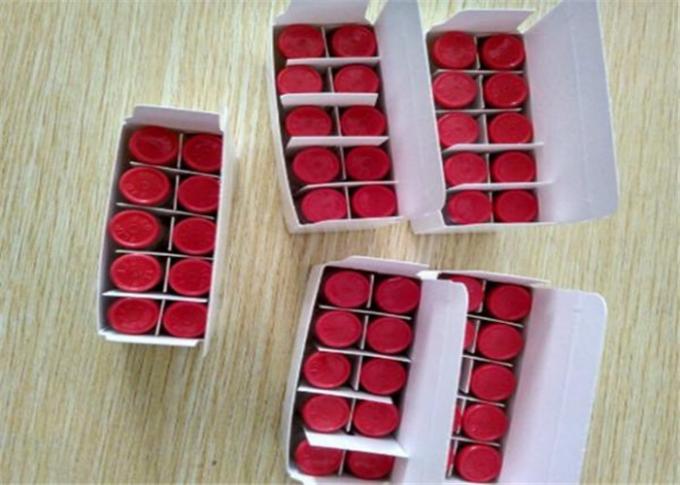 CJC-1295 without DAC Dosage
Mod GRF 1-29 is typically provided in vials containing 2 mg of lyophylized powder, though the amount can vary. The contents should be reconstituted by adding a convenient amount of sterile or bacteriostatic water. If for example 2 mL is chosen and the dosing of the vial is 2 mg, the resulting solution then has a concentration of 1 mg/mL, or 1000 mcg/mL.
At time of dosing, an insulin syringe is used to draw and then inject the desired amount. In the above example, a 100 mcg dose would require a volume of 0.10 mL, or "10 IU" as marked on an insulin syringe.
Injection may be subcutaneous, intramuscular, or intravenous, according to personal preference. If desired, peptide solutions from other vials, such as a vial of a GHRP product, may also be drawn into the same syringe. This reduces the total number of injections required.
I ordinarily recommend a dosage of 100 mcg Mod GRF at a time, simultaneous with injection of a GHRP. For maximum effect, dosing is preferably three times per day at times of low blood sugar, for example about 30 minutes before a meal, but where use is ongoing, a common use is once per day prior to sleep.
CJC-1295 without DAC Storage
Lyophilized MOD GRF 1-29 is stable at room temperature for 90 days, however it should be stored in a freezer below -8°C for any extended period of time. After reconstitution, may be stored for a maximum of 14 days in a refrigerator at 2°C - 8°C. Store vials in an upright position. Store MOD GRF-129 refrigerated between temperatures 2°C - 8°C. Keep in the outer carton in order to protect from light. For one month can be stored at room temperature.
Application & More information for CJC-1295 without :
Releasing Hormone (GHRH), which is the endogenously secreted GHRH by the arcuate nucleus of the hypothalamus of the human body, is 44 amino acids long. It was discovered, however, that only the first 29 amino acids of the protein were equally as effective in binding to receptors on the pituitary gland as the full 44 amino acid structure. The first 29 amino acids in its protein structure were then isolated, which was then called GRF 1-29, but the problem with this derivative of GHRH was the fact that it was rapidly metabolized and cleared from the body by enzymes. Studies have reported that GRF 1-29's half-life is less than 10 minutes and as little as 5 minutes. This was obviously not enough time to ensure a maximized and sustained release of HGH from the pituitary gland, as studies have demonstrated that the full potential of an HGH pulse from the pituitary requires at least 30 minutes as evidenced by the fact that much higher HGH levels (50 times greater) were observed 15 - 30 minutes into subcutaneous administration of GHRH analogues.
Therefore, the solution to this was to modify GRF 1-29 by replacing various amino acids in its structure with other amino acids that would provide a greater resistance to breakdown and cleavage by enzymes. There were many modified analogues developed, and Mod GRF 1-29 (CJC-1295 without DAC) was eventually selected for use, which demonstrated the most promising effects. Mod GRF 1-29 is a modification of GRF 1-29, specifically at amino acids #2, #8, #15, and #27. The result is an extended half-life to that of at least 30 minutes.
Mod GRF 1-29 acts upon receptors located in the anterior pituitary gland, and signals the pituitary gland to increase Human production and cause a release of massive quantities of Human Hormone in a pulsatile manner. The effects of Mod GRF 1-29 are very similar from what would be expected from synthetic HGH administration over the long term, although the amount of time that the released human growth hormone will remain in circulation is of a far less amount of time than synthetic Human Growth Hormone does.
Therefore, multiple applications of Mod GRF 1-29 is recommended throughout the day in order to simulate Human Growth Hormone levels that remain high on a constant basis. Mod GRF 1-29 (CJC-1295 without DAC) is commonly combined with a Ghrelin mimetic (also known as a GHRP - Releasing Hexapeptide), such as GHRP-6, GHRP-2, Hexarelin, or Ipamorelin in order to initiate and amplify a greater pulse from the pituitary compared to Mod GRF 1-29 used solitarily on its own.
If you have any questions, pls feel free to contact me:
Email:pennsy (at) chembj (dot) com
Whatsapp:+8618872220800
Website: http://www.legalanabolic-steroids.com
I will reply you with best price and service at soonest time.
Thank you and welcome your inquiry!
Tag: